The Victory Prayer of Ottoman army at Gallipoli War... 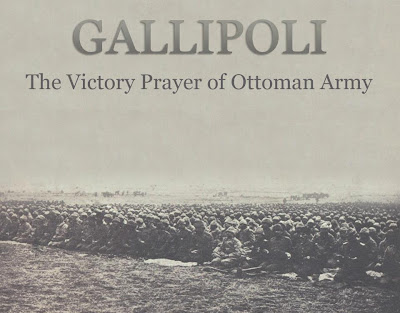 
The Gallipoli Campaign (Dardanelles Campaign or the Battle of Gallipoli) took place at the peninsula of Gallipoli in the Ottoman State (in modern day Turkey) between 25 April 1915 and 9 January 1916, during the First World War. A joint British and French operation was mounted to capture the Ottoman Capital of Istanbul and secure a sea route to Russia.

Dardanelles and Gallipoli witnessed a great Victory of the Ottoman History, against the Allies. It was on 18 March 1915 that Allies gave a start to massive naval offensive in Dardanelles against Ottoman fortifications and were defeated in the end of the day leaving heavy casualties behind..

The battle of the Dardanelles started off with the joint offensive of the British and the French in a bid to capture Istanbul and to give support to their ally Russia. The offensive expected to be crowned with victory in a very short time was pushed back by the Ottomans' unprecedented and unusual defence both at sea and on land. The British and French armies were defeated in the battles at the Strait of Dardanelles and in the Gallipoli peninsula and coerced to withdraw. This is considered an important breaking point in terms of both Ottoman and World history.

One of the characteristics of the battle was that it was the last example of the classic imperialist wars. Europe's imperialist nation-states which started burgeoning in the 19th century finally decided to occupy, partition and parcel out the Ottoman State among them. Another indication of the classic imperialist characteristic of this battle was that the British and French Armies were also composed of soldiers from their colonies. The coloniel troops from Australia, New Zealand, India, Nepal and Africa Countries were shipped to Çanakkale to fight the Ottomans. And as well as Soldiers from Russia, Canada, Greek Islands and the Zion Mule Corps (Jewish Troops) under the command of the British.

The most important aspect of the Battle of the Dardanelles is that it was the last battle won by Ottomans. This had a very favourable psychological effect on the Turkish and Muslim Nation, strengthening their belief that they still had the power to hold out against imperialism.

Çanakkale was the place where the army fought against a might multinational force supported by the strongest navy of the time and managed to stop the enemy and prevent them from invading the Turkish homeland. The size of the loss makes the importance of the campaign even bigger.

The Dardanelles failure has put an end to the British Empire's apogee. From then on Britain's influence in her dominions had gradually declined. Despondent Africa and India have revolted. A period of awakening had begun in the dominions with the sense of national identity. In 20-30 years time, the British Empire has came to an end. The British has sailed for the world sovereignty but the Dardanelles campaign has misled their route.

According to the Ottoman sources, the Allies' total casualties are 187.000 soldiers. The Ottoman causality is 57.084 soldiers in the land attacks and 179.000 soldiers in the naval attacks and totally 211.000 soldiers. The Allied Navy had failed to open the straits and to capture Istanbul; thus, the fear of losing Istanbul disappeared. Ottoman soldiers showed great courage in defending the Dardanelles and they became an example. Allahuakbar!!!
Posted by Unknown at 6:24 AM